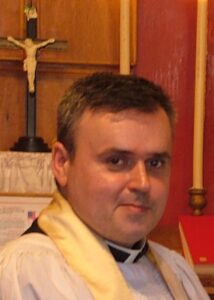 The Reverend Timothy James Perkins passed to his eternal rest at 1.15am on Thursday 4th August 2011 he was 49.

His Funeral will be held at 1.40pm on Thursday 18th August 2011 at Agecroft Crematorium,  Langley Road South, Salford, Greater Manchester.
The funeral will be preceded by a Pontifical Sung Requiem at the Anglican Catholic Church of St.Alban the Martyr, Salford. However, due to size constraints of the Church please contact St Albans Parish Priest; Fr Charles Johnson, (frcharles.johnson2@googlemail.com) if you wish to attend the Mass. Priority will be given to Fr Perkins Family and members of the Parish where he was curate. However the funeral and commital at the Crematorium is open to all.

Recently diagnosed with cancer Fr Tim was to undergo an operation to remove a kidney in June.
Whilst preparing for this operation doctors found that the cancer had spread to his lungs and lymph system. He was told that he had a limited life expectancy of 3 to 6 months. Unfortunately his health soon deteriorated even further and for the last month he was cared for at home in Salford, Greater Manchester, by his friends and Macmillan Nurses.

Born on 21st April 1962 in Wolverhampton, Staffordshire, Fr Tim attended St Peter’s Collegiate School, Compton Park, Wolverhampton from 1974 to 1980. He gained a Diploma of Higher Education in 1984 and the BA (Honours) Degree in Humanities from the University of Wolverhampton in 1985.

From 2002-2006 he served as an Elected Councillor representing Claremont Ward on Salford City Council. He was also a School Governor and a Member of the Royal Hospitals NHS Foundation Trust.

Fr Tim was made a deacon on 24th April 1994 within the Traditional Anglican Communion (TAC) by The Most Revd Louis Falk. Between 1999 and 2001 he ministered within an Old Catholic Jurisdiction returning to Traditional Anglicanism in 2002 and was made a priest on 1st May 2004 within the Traditional Church of England by The Most Revd Michael Newman. He served as Priest in Charge of the Mission of St George, Stretford, Manchester.

Fr Tim was a valued member of the house of clergy within the ACC Diocese of the United Kingdom. A man of prayer and deep faith who displayed great fortitude and grace during the last few months of his life. He will be deeply missed by the people he served at St Alban’s, his brother clergy and his Bishop. Please pray too for his mother and friends in their loss.

+ Rest eternal grant unto him O Lord, and let light perpetual shine upon him. Amen.